Bugging someone’s space might be justified in some instances but it requires special permissions. That means snooping someone outside that context is downright illegal. However, spies still escape the law or the eyes of their victims because their hidden cameras can be as small as a button or coin. The gadgets are hard to notice unless you know how or have the gear to spot them.

Best Hidden Camera Detectors To Get

Checking for glinting lenses in small recesses or crevices can help you find inconspicuous spy devices. But that might not work all the time and can be tedious or awkward to do, especially if you are in someone else’s house or public places. That’s why we highlight in this article the best hidden camera detector options you can grab from Amazon today.

Whether you’re having a weekend getaway and checking in a hotel or just staying at home, have with you a hidden camera detector from our list. You’ll never know who’s playing Big Brother and violating your privacy. 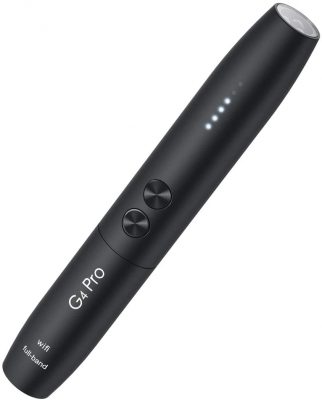 For a detector that’s shaped like a stick, it packs a lot of features. The device is a camera detector and signal sensor combined. It uses six LEDs on its body to alert you of wired or wireless cameras, GPS locators, bugging devices, voice recorders, and radio wave emitters. The lights’ brightness intensifies when detecting signal sources.

There is also laser light on one end of the detector and a 300mAh battery inside. The former component has been upgraded to give the G4 Pro more power to precisely locate hidden cameras when flashed by the lens. Meanwhile, the latter lets the product last a full day on a single charge.

What may be more amazing is how easily you can switch between the device’s modes. Just hit the two side buttons to activate the signal or hidden camera detector mode. 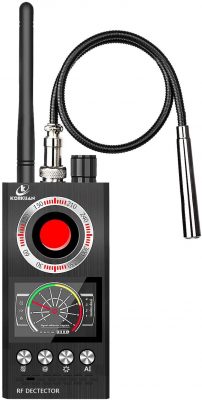 Coming out as an upgraded version of its predecessor, the Wattne Anti Spy Detector can prevent breaches to your privacy like it never has before.

Anyone familiar with metal detectors would find a sense of familiarity upon using this hidden camera detector. This device robotically beeps when it senses a Wave, 2G, 3G, or 4G mobile phone SIM card bug, GPS locator, and 1.2 to 5. 8G wired or wireless camera devices.

Developers have updated this hidden camera detector by infusing an AI detection technology, a huge step up in the spy detection capabilities of this device. On top of that, improvements in the LED display made detection of hidden bugging devices fast and precise.

The design adopted for this device might be archaic and not as ergonomic when compared to the G4 Pro. It’s bulky, thus, heavier. However, this device has more capabilities than the G4, which only has RF and laser detection mechanisms. 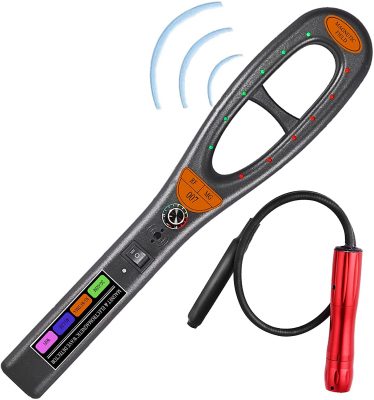 Resembling a badminton racket, the KAXYUYA GPS Tracker Detector is a bit bulky but very easy to use. That isn’t the only reason why this device is a top pick, though. It is also considered to be among the most advanced detectors for hidden cameras to date.

Under the device’s hood is an advanced bug detector technology powered by ultrahigh-sensitivity chips. The said components make the detector more than capable of sensing hidden cameras or any forms of eavesdropping devices emitting RF signals and magnetic fields.

A hidden camera or device detection is signaled by the green and red lights on the device. The green lights lined on one side of the product’s head alert for RF signals. Meanwhile, the red ones on the opposite side are for magnetic fields. Those also indicate GPS sensing even when the device is off.

As regards other physical features, the KAXYUYA GPS Tracker Detector also comes with a detachable hose-like magnetic device detector. On top of that, it has an LED torch and battery charger. The removable parts are intended to compensate for the bulkiness of the main device. That is good if you want to make the spy detector gadget lighter to carry. 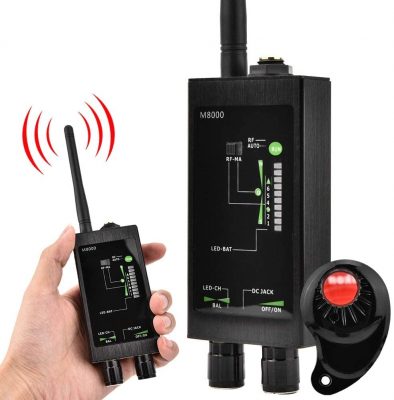 This M8000 Wireless Signal Radio Detector hits two birds with one stone, and that is why we are recommending that you get it.

It’s a handheld spy detector that sweeps an area to help you discover not only magnetic fields. It can also identify radio frequencies emitted by bugging devices or hidden cameras. How does it exactly work, you ask? The hidden camera detector uses an LED sensor. It becomes sensitive when it gets near a source of a signal or magnetic field. To elaborate, it will beep increasingly to indicate the presence of a hidden bugging device in your room or car. Configuring the RF and hidden camera detector is possible through the sensor adjustment dial.

The only downside of this device is that it does not have a standard USB charger. It must be plugged into a socket when the battery juice is low. Nonetheless, it makes for a good hidden camera detector alternative to the higher-ranked products in this list.

This DefCon DD1206 Hunt Sweeper hidden camera detector is a professional-grade device. However, it does not come cheap like products of the same caliber. That’s why as a buyer, make sure to consider the price of the device and evaluate if it is justifiable given the device’s features.

Nevertheless, the DefCon DD1206 Hunt Sweeper can pass your standards so you must not pass on it if you have the budget. The tool has the power to detect an array of digital and analog transmitters. For example, GSM, GSM (DCS), WCDMA or DECT 3G, Bluetooth, or Wi-Fi signal-based bugging devices covertly planted in your room, office, or car.

It also has a feature that senses FM transmitters through soundwaves. You won’t get that in most spy detectors in the market today. The mic in the device would pick up the sound and will result in a beep that signals a hidden device’s presence. A light will also flash when the beep sound goes off.

As mentioned beforehand, the device is not for the budget-constrained. Hence, further considerations will have to be made. Where do you plan to use the device? Is it sturdy compared to other alternatives? Is it going to serve your purpose in the long run? If you are satisfied with the showcased features and have the answers to your questions, this device might be the one you are looking for. If not, we still have more alternatives for you. 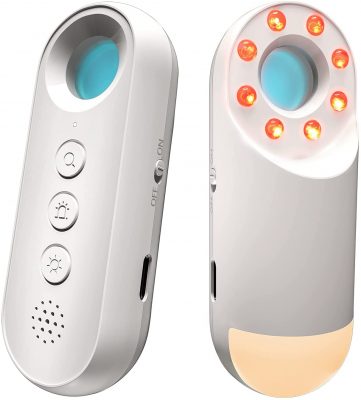 This Ehomful Anti Spy Detector is perfect if you love traveling and want to make sure your hotel room is a safe space to stay. Having a chic design that disguises it as a modern remote controller or a night light, it’s not weird to use the gadget in the said place. Also, the ones who planted a hidden camera in your room would not suspect that you are trying to outsmart them.

Like some of the hidden camera detectors picks we’ve already featured, the product has red LED lights. Those flash when they sense suspicious lenses within range. The detector also has motion sensor capabilities that sound an alarm when triggered.

Upon checking it out, you’ll notice that the device is simple. You can’t have much out of it. Nevertheless, it works and is a good option if you do not want to tinker with many settings. 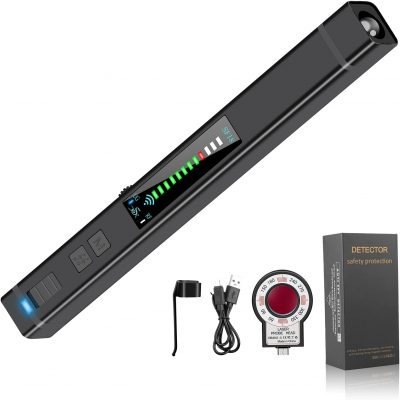 The Locxreo Hidden Camera Detector is a good G4 Pro alternative. It has nearly the same design and capabilities when compared to the latter model.

Let’s talk about what is great about the product, starting with the appearance. The hidden camera detector’s cylindrical shape makes it easy to hold. As a result, you can bring it anywhere with you and whenever you need to double-check if lenses are spying on you.

Now, let’s elaborate on what is inside, which makes the product effective in thwarting spy devices. Key to the detector’s functionality and accuracy is its chip that supports 12 sensitivity levels. On top of that, there are four modes that a user can switch to. Those are flashlight auxiliary lighting, RF wireless signal, UG magnetic field signal, and camera detection.

The hidden camera detector also integrates a power source that can last 25 hours after each charging cycle. With that, there’s really no worry about running out of battery when you need to use the device. Furthermore, you’ll love this device even more because it has a standard USB charging interface.

Wrapping our list is this affordable spy-detecting device from Facamword. The device being convenient to use for detecting hidden cameras and bugging devices nearby is what makes us like it. You might think of it the same way too after learning about its main features below.

The product’s greatest strength is its viewfinder. The said feature makes use of eight red lights that flash when hidden devices are detected. The lights get brighter as you get closer to a hidden device, whether it is on or off.

Aside from what is mentioned, the hidden camera detector can also be used as an alarm system. It lets out sound when it senses motion around.

The product might be limited compared to premium releases in the market but is one of the best hidden camera detectors anyone with a tight budget can buy.

Given some of the top options from the market, we know that you might still need some tips when choosing the best of the best-hidden camera detectors. If you do, then this section is for you.

The right hidden camera detector will be the one that suits the place you want to secure, the way you want to use it, and your budget. Let say you are running a company and you suspect someone is bugging your boardroom. As a concerned company official, you would want the area free of the said intrusive devices. In this context, you are better off choosing professional-grade detectors such as the DefCon DD1206 Hunt Sweeper or KAXYUYA GPS Tracker Detector. Although those might be pricey, you can be assured that the efficiency is high for detecting any signals or magnetic fields coming from unknown sources. And for many companies nowadays, that benefit outweighs the cost so investing in premium detectors is a welcome idea.

On the other hand, the ideal product if you are a traveler and on a budget will be different. Detectors such as the G4 Pro, Wattne Anti Spy Detector, and Facamword Hidden Camera Detector might suit you better. Some of these devices may lack multifunctionality, but they do the job well and can be portable.

There was a time when camera detector apps were highly effective as anti-spy tools. That was because many spycams of the past worked through the emission of infrared rays that a lens of a smartphone can detect. Some apps that were relied on by many users were Detectify for Android and Hidden Spy Camera Finder for iOS. However, advances in spy camera technology have been made so modern models no longer emit IR rays. The said cameras now yield radiofrequency rays and smartphones still have to play catch up when it comes to getting the features to sense those. This is why hidden camera detector devices are still helpful to have.

In a world that has an increasing need for privacy protection, a hidden camera detector is your go-to blanket for security. It helps you become like a detective who can easily deduce that there is someone indeed spying on you. We hope you find that all-seeing eye through the featured products on our list. Just remember to use the devices responsibly.